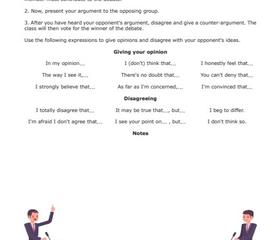 An activity or students to practice debating

2. Divide the class into an even number of groups with three or four students in each group.

Write a list of 'for' and 'against' topics on the board: Examples:

Animals should not be kept in zoos. Actors and professional athletes are paid too much. Boys and girls should study in separate classes. People are too dependent on computers. Wealthy nations should share their wealth among poorer nations.

3. Ask the groups to choose which topic they would like to debate. Two groups must choose the same topic, one arguing for and one arguing against.

4. Next, give each student a copy of the worksheet. Go through the instructions on the worksheet and review the language for giving opinions and disagreeing with the class.

5. The students then write their debate topic at the top of the worksheet. In their groups, students prepare their 'for' or 'against' argument by making notes on the worksheet.

6. When everyone is ready, two groups come to the front of the class and debate their topic with each group member contributing to the debate.

7. After each group has presented their argument, the two groups respond to each other by disagreeing and giving a counterargument.

8. When the debate is over, have a class vote to choose the winner of the debate.

9. Have the students who voted for the winner explain why that group won. Then, two new groups come to the front of the class and begin the next debate and so on. 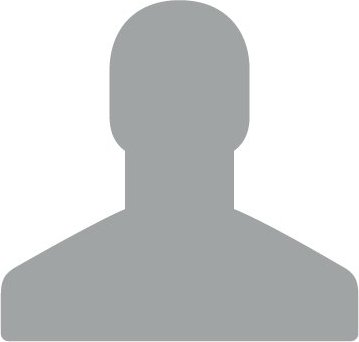